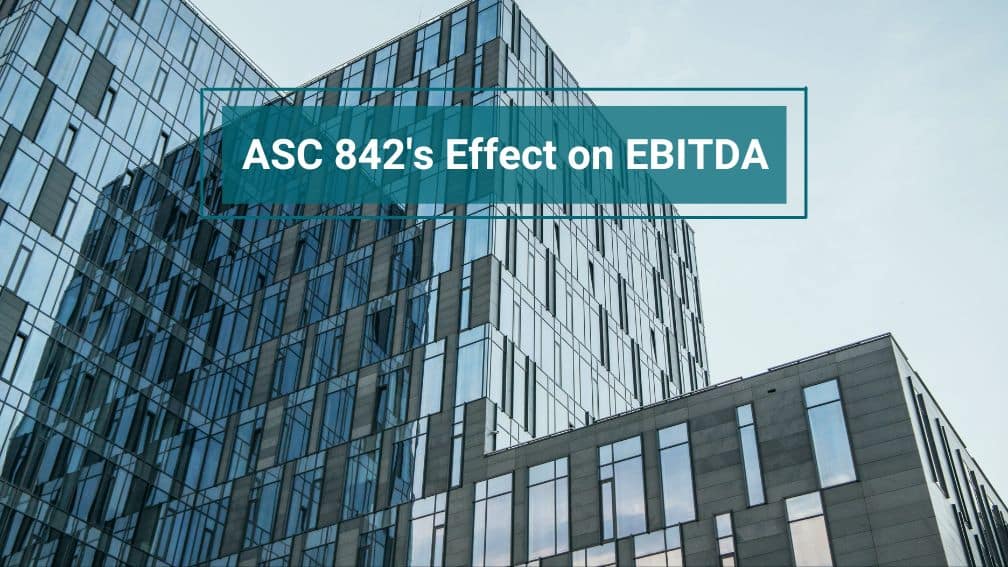 Many businesses have only recently adopted ASC 842, the new lease accounting standard, pending their effective dates. Finance teams are just now looking at how it affects financial ratios and metrics. As one of the more popular metrics used to informally gauge a company’s financial health, it’s important to understand ASC 842’s effect on EBITDA.

For those unfamiliar with the term or what it means, here’s a brief primer to get you up to speed.

EBITDA stands for earnings before interest, taxes, depreciation, and amortization. The formula to calculate EBITDA is very simple—just sum up the total amount of interest, tax, depreciation, and amortization expenses, then add that figure back to net income. By eliminating the impact of non-operating management decisions, such as tax rates and interest expenses, EBITDA places a heavy focus on the financial outcomes of operating decisions.

Perhaps the best way to think of EBITDA is as a measure of a company’s ability to generate cash. While cash is an important consideration, it’s not the only measure of financial health. Critics of EBITDA contend that it can lead to overestimating a company’s profitability. Interest, tax, depreciation, and amortization are often seen as “drags” on profitability, and EBITDA essentially discards them. But all of these items have a significant effect on the balance sheet.

Still, as a metric for comparing companies (or even a single company over a period of time), EBITDA gives a fairly realistic view of profitability. Investors tend to focus on net income, revenue, and cash flow, and EBITDA is an easy way to analyze and compare profitability between companies and industries.

Download the resources your need to kickstart your ASC 842 compliance journey.

Why Is EBITDA Important?

Beyond its popularity with non-accountants, EBITDA is important because it’s used as the basis for other calculations and ratios. After determining EBITDA, a typical next step is to figure out whether the calculation reflects a profitable standing. ASC 842 foundationally impacts your EBITDA. One of its more popular variations is EBIT. As the name implies, EBIT does not add depreciation and amortization back to net income.

Some of the more popular next steps include calculating the EBITDA margin, EBITDA coverage ratio, and adjusted EBITDA.

You can think of the EBITDA coverage ratio as another way to put EBITDA value in the proper context. It’s effectively a solvency ratio that measures the ability of a business to pay off its debts and lease liabilities using EBITDA. After the EBITDA calculation, you arrive at the EBITDA coverage ratio by dividing the sum of lease payments and EBITDA by the sum of principal and interest payments and lease payments. The formula looks like this: (EBITDA + Lease Payments)/(Interest Payments + Principal Payments + Lease Payments)

The distinction between EBITDA and adjusted EBITDA is minor, but it is important. Adjusted EBITDA normalizes EBITDA by removing operational anomalies like owner bonuses, rent paid above market value, litigation expenses, and a single-time loss or gain. As adjusted EBITDA is dependent on each company’s circumstances, there is no standardized formula. It’s typically the job of a financial analyst to decide what anomalies should be removed when calculating adjusted EBITDA.

Historical accounting guidance, before ASC 842, operating leases were not required to be recorded on the face of a company’s financial statements—they only had to be included in the notes. Under the new standard, operating leases are recorded on the balance sheet and reflected as a right of use (ROU) asset and a corresponding lease liability. Which not only has a material impact but expense recognition of the underlying asset, in accordance with the updated generally accepted accounting principles, will affect your financial statements.

It’s this new requirement that operating leases be recognized on the balance sheet—and the corresponding effect on the income statement—that could have an impact on key ratios and, ultimately, on EBITDA, and your organization’s financial position.

The net result will be a slightly lower current ratio (the value of current assets divided by current liabilities). Other ratios affected would include the debt to net worth ratio, funded debt to EBITDA, and debt service coverage.

Ultimately, the lease accounting changes in ASC 842 should not significantly impact a business valuation. However, the calculation of cash flows, discount rates, and other figures can significantly impact the bottom line if accounting practices are not carefully considered. To ensure lease accounting that’s both accurate and optimized for your financial ratios, you need a system built for the task. Occupier’s products and services were built to ensure ASC 842 compliance, giving you the best results in your financial reporting.

We leverage a modern and innovative tech stack that takes all the worry out that comes with the changes in standards. If you’re ready to see how Occupier can streamline your entire lease accounting lifecycle, get in touch with us today and schedule a demo.