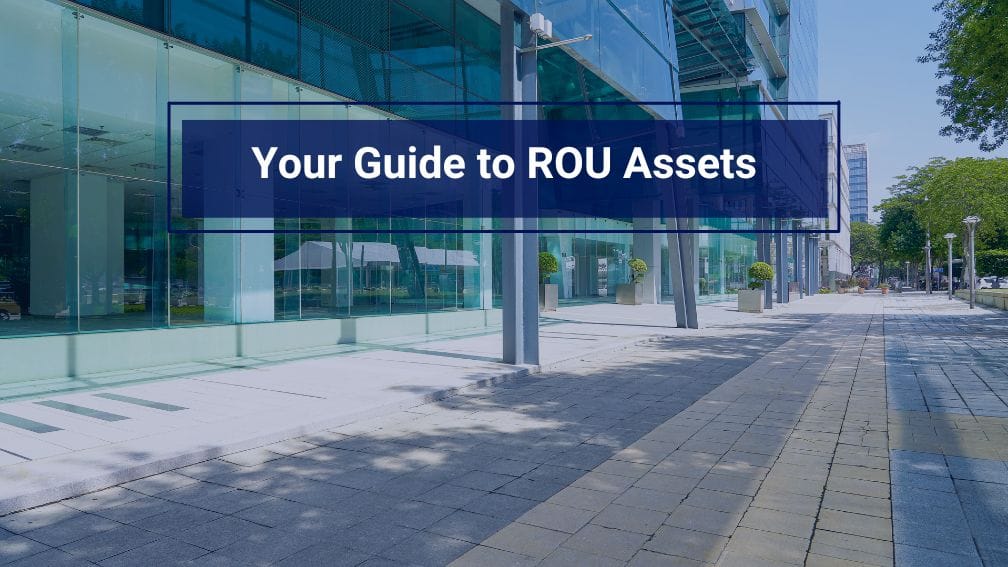 This guide will share everything you need to know about ROU assets—what the term means, how to calculate ROU, and how it affects your financial reporting.

When ASC 842 became the new lease accounting standard for US companies following GAAP (Generally Accepted Accounting Principles), it rewrote the lessee accounting process. Essentially making lessees recognize a ROU Asset or right-of-use asset and a lease liability for virtually all leases. Now it’s an essential part of their everyday practice.

The right-of-use (ROU) asset is a critical component of modern lease accounting standards, including ASC 842 and IFRS 16. The ROU asset represents a lessee’s right to use a leased asset over a lease term.

The leased assets in question are usually property or equipment. However, an ROU asset can be anything for which a lessee is granted the right to obtain economic benefit from using an asset owned by another entity.

In simpler terms, an ROU asset is a lease asset. A lease liability is the lessee’s financial obligation to make the payments as defined in a lease agreement, measured on a discount basis.

How the ROU Asset Is Calculated

Generally, the ROU asset is calculated as the initial lease liability amount, plus any lease payments made to the lessor before the lease commencement date, any initial direct costs incurred, less any lease incentives received.

This concept is applied with slightly varying methods in ASC 842 and IFRS 16.

The ROU Asset Under ASC 842

What is new under ASC 842 is the capitalized ROU asset requirement for operating leases. Regardless of a lease’s classification as an operating lease or finance lease, the ROU asset is calculated similarly.

How to Calculate the ROU Asset Under ASC 842

In order to calculate the initial recognition of the ROU asset under ASC 842 for both operating leases and finance leases, first start with the initial amount of the lease liability, computed by discounting the remaining lease payments, then:

If you are unsure about any of the inputs required to calculate an ROU under ASC 842, here are some definitions and examples for clarification:

Initial Direct Costs: A lessee’s initial direct costs are the incremental costs that occur in the process of obtaining a lease. This includes:

Prepayments and Incentives: Any payments made to the lessor before lease commencement are added to the ROU asset. The lessor may offer incentives to the lessee to sign a lease agreement. These incentives include:

The ROU Asset Under IFRS 16

As mentioned above, IFRS 16 does not distinguish between operating and finance leases. A single approach to lease accounting is applied, and after adopting the standard, all leases are reported as finance leases.

These finance leases are capitalized and recognized on the balance sheet as assets and liabilities unless the lease contract qualifies for any exemptions laid out in the standard.

As with ASC 842, IFRS 16 refers to the leased asset as the ROU asset. This standard’s method for calculating the ROU asset is slightly different than what is defined in ASC 842.

How to Calculate the ROU Asset Under IFRS 16

To calculate the ROU asset in IFRS 16, start with the initial amount of the lease liability, then:

The amortization period for the ROU asset is from the date of lease commencement to either the end of the lease term or the end of the useful life of the asset, whichever is earlier.

When it seems reasonably sure that the lessee will exercise an option to purchase the asset, the amortization period is through the end of the asset’s useful life.

Calculate your ROU Asset and Lease Liability with our Lease Amortization – Excel Spreadsheet.

As ASC 842 and IFRS 16 both introduce the ROU asset, operating leases are now recorded on the balance sheet for the first time. Traditionally, operating leases would be recorded in the notes of financial statements. One of the main goals of these revised standards has been to increase the transparency of lease accounting and related financial reporting.

While ASC 842 requires both operating and finance leases to recognize the ROU asset and lease liability, there are some subtle differences in accounting.

If you answered no to all of the above questions, the lease is an operating lease.

If you answered yes to any of the questions, the lease is a finance lease.

Once you have arrived at the proper classification, you can consider the differences in accounting between the two.

Depending on lease classification, how lease expenses are classified in a profit and loss (P&L) statement will differ.

Amortization expense under an operating lease is classified as a lease expense.

For finance leases, lease payments are reported as financing or operating in the cash flow statement, depending if the amounts are related to principal or interest.

Once an ROU asset has been calculated, the methodology for calculating amortization is different for operating and finance leases.

For operating leases, the amortization charge is related to the lease liability. ASC 842 provides two different ways to calculate amortization.

The formula for the first method is:

This method may only be practical for companies with a smaller portfolio of straightforward leases. This calculation quickly becomes tedious when applied to an extensive portfolio of more complex leases. Lease modifications, remeasurements, impairments, and foreign currency translations will greatly complicate calculating amortization charges under this method.

The second method is a simple formula:

In this method, amortization is calculated as the difference between the straight-line lease cost for the period and the periodic accretion of the lease liability (using the effective interest method).

ASC 842 defines operating lease liabilities as operating liabilities rather than debt. This means ASC 842 is unlikely to impact debt-based ratios like debt-to-capital or debt-to-equity ratios significantly.

On the other hand, finance leases are classified as debt, and this could have a noticeable impact on some ratios. This fact only reinforces the importance of properly classifying a lease as an operating lease or a finance lease.

Impairment describes a permanent decline in the value of an asset. Impairment happens when an asset’s cash flows or other benefits decline. For example, if a natural disaster like a tornado or hurricane were to strike and damage a company’s production equipment, that equipment has become impaired.

Measurements after impairment are calculated as the carrying amount immediately after recording impairment minus any subsequently accumulated amortization.

The guidelines for what constitutes a finance lease or an operating lease are self-explanatory. The differences in accounting between the two classifications are also reasonably easy to learn and maintain. However, there are some finer points to consider when it comes to ROU assets throughout the lease accounting process that applies to one or the other or both.

For both types of leases, an ROU asset has to be:

ROU assets on finance leases must:

ROU assets on operating leases must:

The Impact of ROU Assets

Whether your organization has transitioned to ASC 842 or IFRS 16, recognizing the ROU asset and lease liability on balance sheets represents a significant shift in lease accounting and financial reporting.

Thankfully, these major shifts in standards and practices don’t happen very often. When they do, a finance team must have a solid understanding of the methods for lease accounting, calculating the ROU asset, and presenting financial statements. As every business is different, and each lease contract is unique, each organization needs detailed, nuanced policies to meet requirements and deliver accurate financial reports.

Occupier Helps You Manage the Change

The introduction of the ROU asset and its related lease accounting changes has proven challenging for many organizations. When you combine all the new requirements with the specifics of your company’s lease obligations, you might not feel confident that you’re getting it right. That’s when you need a comprehensive lease accounting solution that can simplify the entire lease accounting process under new standards.

With Occupier, the entire process—from calculating the ROU asset all the way through closing the books—has never been more straightforward. You and your finance team also gain the peace of mind that comes with maintaining compliance with ASC 842 and IFRS 16 and having confidence in your lease accounting.With Occupier’s intuitive and innovative tech stack, your teams spend less time studying the new standards and instead automate your accounting compliance journey and the creation of your journal entries. Your team and more time collaborating and strategizing. Request an Occupier demo today to find the solutions that fit your unique business.